You are here: Home » About Us
Our Story 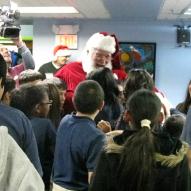 Santa’s Helpers Board Members have helped Santa Claus deliver thousands of toys and hundreds of jackets to children in-need in Southern Arizona.

No Salaries: We do not have any Board Members on salary.

All donations go to the purchasing of toys or the operations of Santa’s Helpers.